1962 Ferrari 250 GTO Many people will argue that the best car in the world is the Ferrari GTO. While more modern supercars surpass the GTO in terms of performance, none excel better in both form and function. During its heyday, the GTO dominated the World Sports Car championship, and […] 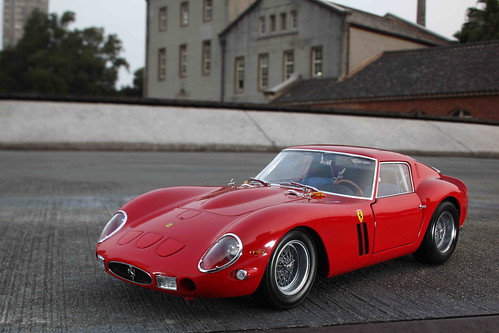 Many people will argue that the best car in the world is the Ferrari GTO. While more modern supercars surpass the GTO in terms of performance, none excel better in both form and function. During its heyday, the GTO dominated the World Sports Car championship, and it is still one of the most beautiful shapes ever to grace a Ferrari chassis.

For these reasons, the GTO is one of the most desired and expensive cars. In fact, chassis 3729GT received a high bid of nine million dollars at Bonhams’ 1997 Gstaad Auction, but failed to meet its 10 million dollar reserve. Many cars have fetched a higher price privately, but if 3729GT had sold, it would have set the world record price for an automobile at public auction.

So what is all the fuss about? What we have here is probably the greatest road and track car ever made. It combines sexy styling, championship-winning engineering and exclusivity. Only 39 copies exist and all have colorful histories.

For the 1962 manufacturer’s championship, focus was switched from sports prototypes to grand touring cars and Ferrari was provided with increased motivation to further develop their 250 GT as much as the rules would allow. They built the 250 Gran Turismo Omologato (GTO), a car named after the homologation process in which it was conceived.

Providing a base for the GTO was the 250 GT chassis. Starting in 1954, with the 250 Europa GT, the engine, chassis and body of the 250 series evolved into a greater product each year. The final development was the GTO, and it was bulletproof from the start.

Before the 1962 season, Ferrari assembled a small team led by Giotto Bizzarrini who hacked his old 250 Boano chassis and modified it, in secret, to his own ideas. Fixed was a rather crude body which took advantage of a much lower and shorter dry-sump engine. At the front was a smaller fascia that made the old short wheel base (SWB) look like a brick. Initial test results around Monza showed significant improvements in every area over the SWB Berlinetta and Sperimentale, sometimes called the GTO prototype, that raced at LeMans in 1961.

Before production of the GTO commenced, Bizzarrini and several key people left Ferrari during the famous Palace Revolt. This left Girolamo Gardini to sort out Ferrari’s 1962 sports car. Gardini used most of Bizzarrini’s modifications from the test car and added a rear spoiler and watts linkage for stability.

At their yearly press conference in 1962, Ferrari released no fewer than six different racing models and among these versatile race cars was the production version of the 250 GTO. This supercar would eventually become the most important though, demanding money, attention and acclaim.

During its launch, many of the press called the GTO ‘a Testa Rossa with a roof’. They rightly named it as such since many of the ideas used on the GTO came straight from Ferrari’s prototypes. Every aspect of the GTO’s engine was upgraded to reflect the 250 Testa Rossa’s. Compared to the older Tipo 168, the newer Tipo 168/62 used larger valves, smaller clearances, lighter materials and dry sump lubrication.

Designated type 539/62 Comp, the chassis in the GTO was an evolution of the unit found in the 1961 250 GT Competition. Through years of development, this chassis had become more like a space frame, using a higher number of small bracing tubes. Upgrades to the chassis also included new front brakes, a more adjustable, stiffer suspension and a lower driveline.

Inside, the GTO was very sparse and purposeful. As such, the only covered areas were the thinly clothed seats. No speedometer or odometer was offered, and the only real luxury was the wooden Nardi steering wheel.

During its first year, GTOs decimated the competition. Thus, Ferrari scored maximum points in 1962 Division III Championship. During the fifth round at Le Mans, GTOs placed second and third overall. This was a remarkable result, and proved that the GTO could beat most cars in the prototype category.

By the end of the first season, Jaguar, Aston Martin and Chevrolet tried to convince the governing body that the GTO was not a GT car. However, Appendix J, Section 254 stated that and modifications introduced after homologation did not disqualify the car if they were a ‘normal evolution of the type’. Since the GTO was an ‘evolution’ of the largely produced 250 GT road car, it was within rules, although the five-speed gearbox and dry sump lubrication were never factory road car options.

The remaining two seasons would prove very successful for the GTO. Ferrari again took the Division III championships in both 1963 and 1964. By the end of the 1964 season, Shelby-led Daytona Cobras were proving their worth and for the first time GTOs were beaten around Le Mans and Sebring.

Beyond 1964, the GTO was stretching its potential. Ferrari was unable to homologate their rear engine 250 LM and instead developed a competition version of the 275 GTB, which really became the ’65 GTO. These developments left the hat trick of the division III championships to forever highlight the end of Ferrari’s 250 series.