The second generation Thunderbird built from 1958 to 1960 were Ford’s first unibody cars, and were also America’s first production cars with bucket seats and a full length center console. The 58-60 Thunderbird’s are commonly referred to as the "Squarebirds" due to their design. Photographed at the 2009 International Route […] 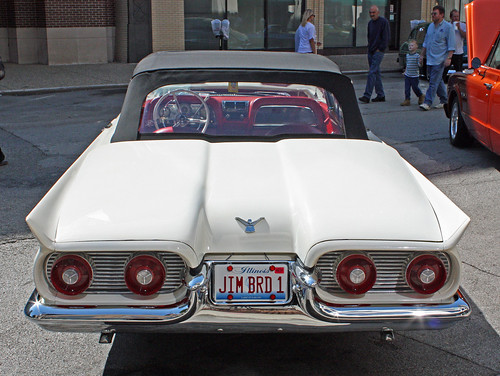 The second generation Thunderbird built from 1958 to 1960 were Ford’s first unibody cars, and were also America’s first production cars with bucket seats and a full length center console. The 58-60 Thunderbird’s are commonly referred to as the "Squarebirds" due to their design.

Photographed at the 2009 International Route 66 Mother Road Festival in Springfield, Illinois on September 25-27, 2009.

You are invited to stay and browse through my stream. Here’s a quick index to my little corner of Flickr:

Springfield, Illinois: All of my photographs of Springfield and the Abraham Lincoln Sites are in this collection. For the City of Springfield, there are separate sets for the Capitol Complex, Downtown (including the Old State Capitol), Neighborhoods, Parks, Illinois State Fairgrounds (and past State Fairs), and more. Photographs of Lincoln sites include the Abraham Lincoln Presidential Library and Museum, Lincoln Home National Historic Site, Lincoln Tomb, and so on. Also in the Lincoln "All About Abe" (Set) are a few Lincoln sites not located in Springfield.

Beyond Central Illinois: Other locales in the United States and Canada including New York, Chicago, San Francisco and Seattle.

In addition to my location-based sets, here are links to some "topical" collections and sets I’ve put together:

Barbers & Barber Shops: Traditional barbers and barber shops are on the endangered species list. But there are still plenty to be found if you go looking for them.

Almost Everything Else. Check It Out!!!: Included topics range from man’s first walk on the moon to small town schools and churches, and from Soft-Coated Wheaten Terriers (our favorite breed) to things that are abandoned, neglected, weathered, or rusty.