Citroen is a French automobile manufacturer. Founded in 1919 by André Citroën, it was the one of the world’s first mass-production car company outside of the USA.[citation needed] Since 1976 it has been part of PSA Peugeot Citroën, and its headquarters is on rue Fructidor,[citation needed] in Saint-Ouen, Seine-Saint-Denis, near […] 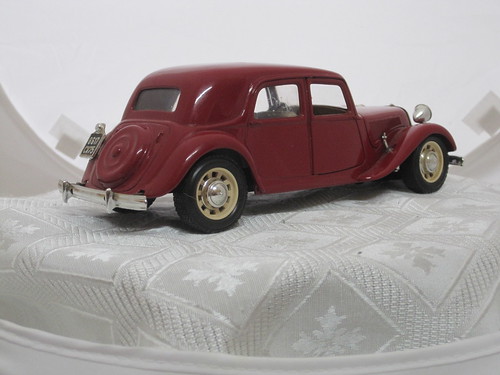 Citroen is a French automobile manufacturer. Founded in 1919 by André Citroën, it was the one of the world’s first mass-production car company outside of the USA.[citation needed] Since 1976 it has been part of PSA Peugeot Citroën, and its headquarters is on rue Fructidor,[citation needed] in Saint-Ouen, Seine-Saint-Denis, near Paris.[2] The brand celebrated its 90th Anniversary in 2009.
Originally a mass-market car maker with relatively straightforward designs, Citroën shocked the world in 1934 with the innovative Traction Avant, the world’s first mass-production front wheel drive car (1934–57). Other significant models include the H Van (1947–81), the 2CV (1948–90), the DS (1955–1975) and the CX (1974–91).

The Citroën Traction Avant (French pronunciation: [tʁaksjɔ̃ʔaˈvɑ̃]) was an innovative front wheel drive automobile produced by the French manufacturer Citroën. About 760,000 units were produced from 1934 to 1957.
The Traction Avant, French for "forward traction", was designed by André Lefèbvre and Flaminio Bertoni in late 1933 / early 1934. While not the first production front wheel drive car – Alvis built the 1928 FWD in the UK , Cord produced the L29 from 1929 to 1932 in the United States and DKW the F1 in 1931 in Germany – it was the world’s first front wheel drive steel monocoque production car. Along with DKWs 1930s models, the Traction successfully pioneered front wheel drive on the European mass car market.
The Traction Avant’s structure was an arc-welded monocoque (unitized body). Most other cars of the era were based on a separate frame (chassis) onto which the non-structural body ("coachwork") was built. Monocoque construction (also called Unit Body or "Unibody" in the US today) results in a lighter vehicle, and is now used for virtually all car construction, although body-on-frame construction is still suitable for larger vehicles such as trucks.
This method of construction was viewed with great suspicion in many quarters, with doubts about its strength. A type of crash test was developed, taking the form of driving the car off a cliff, to illustrate its great inherent resilience. [1]
The novel design made the car seem very low-slung relative to its contemporaries — the Traction Avant always possessed a unique look, which went from appearing rakish in 1934 to familiar and somewhat old fashioned by 1955.
The suspension was very advanced for the car’s era. The front wheels were independently sprung, using a torsion bar and wishbone suspension arrangement, where most contemporaries used live axle and cart-type leaf spring designs. The rear suspension was a simple steel beam axle and a Panhard rod, trailing arms and torsion bars attached to a 3-inch (76 mm) steel tube, which in turn was bolted to the "monocoque".
Since it was considerably lighter than "conventional" designs of the era, it was capable of 100 km/h (62 mph), and consumed gasoline / petrol only at the rate of 10 litres per 100 kilometres (28 mpg-imp; 24 mpg-US).
The original model, which was presented on 18 April 1934, was a small saloon with a 1303 cc engine. This model was called the 7A, which was succeeded in June 1934 by the 7B with a higher powered engine of 1529 cc .The 7B in turn, was succeeded in October 1934 by the 7C with an even higher powered engine of 1628 cc. Later models were the 11 (launched in November 1934), which had a four-cylinder 1911 cc engine, and the 15 (launched in 1938), which had a 2867 cc six-cylinder engine. The numbers refer to the French fiscal horsepower rating CV. The 11 was an 11 CV, but curiously the 15 was actually 16 CV. The 11 was built in two versions, the 11L ("légère", or "light"), which was the same size as the 7 CV, and the normal model 11, which had a longer and wider wheelbase.
Citroën planned two variants that never entered production, since there was not enough funding available to develop them, except as running prototype vehicles. One was an automatic transmission-equipped model, based on the Sensaud de Lavaud automatic transmission and the other was a 22 CV model with a large V8 engine, of 3.8 litres. The car was supposed to have a less spartan interior than the other Traction Avant’s and it was to feature Citroën’s own new V8 engine. About twenty prototypes were made, but when the project was canceled in 1935 due to Michelin’s takeover, they were probably all destroyed.