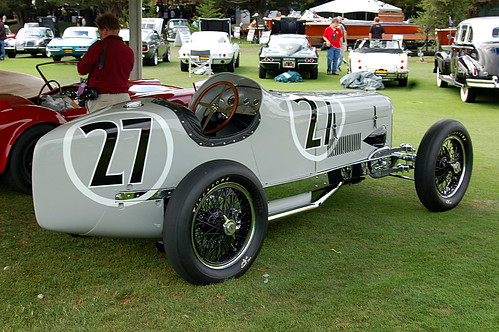 The story of the 1931 Miller V16 race car actually begins with a 1930 Cord Brougham Sedan given to Harry Miller by the Auburn Automobile Company as partial payment for Miller’s development work on the new front wheel drive Cord. The mercurial Miller, already famous for his innovative engines and four Indianapolis 500 wins, found the Cord’s anemic Lycoming straight-eight a disappointment, and resolved to revitalize the car with a completely new V-16 of his own design.

Starting with a clean sheet of paper, Miller designed his powerplant with a barrel-type aluminum crankcase and four cylinder blocks with integral heads, each with four cylinders. Dual overheard camshafts actuated 2 valves per cylinder, which featured a respective bore and stroke of 2.65 and 3.4 inches. Eight newly-designed Miller-Adamson carburetors flowed into siamesed downdraft intake ports in each cylinder block, feeding two cylinders each.

Nearing completion, the engine and associated new drivetrain were moved with the rest of the Miller shop to a new location in Gramercy Park in mid-January 1931 when, in typical fashion, Miller suddenly decided to abandon the project and turn back to the racing side of the business, building three new long-wheelbase chassis to conform with the AAA rules drafted the previous year. Miller adapted his 1924 front-drive DeDion suspension design to the front and rear of the new car, with dual parallel quarter elliptic springs all around and an aluminum differential spinning swing axles at the rear. All three cars were originally to be powered by 230.9 CI V-8 engines of the type that had won the 1930 500-mile race, but sometime during their construction, one of the buyers, Hollywood money man William S. White, convinced Miller to install the new V16 in his racer.

Shorty Cantlon, who had finished fourth at Indy in 1930, piloted the car, with Duke Smale as his riding mechanic. Starting from 26th place, Cantlon powered to 4th by lap 10 and got as high as third before carburetion problems forced him to pit and replace all sixteen spark plugs. A broken connecting rod finally put them out on lap 88, and they were scored in 27th place.

Cantlon suffered serious injuries before the 1932 Indianapolis 500, prompting White to hire “The Midwest Cyclone,” Sprint driver Brian Saulpaugh. Saulpaugh and riding mechanic Steve Gregory qualified on the outside of the front row for the 500 at a strong 114.369 mph. Saulpaugh kept the car in 3rd by lap 10 but on lap 55 an oil line broke, forcing their retirement.

White then sold the car to Harry Hartz, who removed the V16, shortened the wheelbase to 100 inches and installed a 220 cubic inch Miller 4 cylinder engine. Hartz entered the car with driver Saulpaugh in a September 100-miler in Detroit, where Saulpaugh finished 6th. In a November 150 mile race at Oakland, Hartz hired Lester Spangler, who crashed the car on the 10th lap. Hartz brought Spangler, an Indy rookie, to the Brickyard in 1933, where the rising young star gave a creditable performance in qualifying 7th with a speed of 116.903mph. Tragedy marred the effort, however, when both Spangler and riding mechanic G.L. George were killed upon impact with the southwest wall.

Earl Haskell then bought the car from Hartz, skipping the 1934 Indianapolis 500. Rex Mays raced it later that season to a 10th place at Mines Field CA. In 1935, Haskell put Floyd Roberts and riding mechanic Carl Parenti in the car for the 500. In its best overall performance at Indianapolis, it qualified third, stayed in the top ten throughout most of the race, and finished a very respectable forth.

Joel Thorn purchased the car in 1937, when it qualified 17th and finished 13th in its final competitive outing at the Speedway. It returned post war in 1947 with flathead Ford power and again in 1950 with a Maserati engine and a new single-seat body, but failed to qualify on both occasions, having finally reached terminal obsolescence. Twenty three years would pass before Harry Miller’s V16 racer would begin its almost impossibly improbable journey to resurrection.

In 1973, collector Bob McConnell discovered the Miller, minus its V16 engine, in the small wood garage in Indianapolis that had housed it since 1950. McConnell’s research soon confirmed it was the sister car to the Hepburn-Shaw-Myer car he also owned, and he was soon persuaded by Chuck Davis of Chicago to sell him the old machine. Davis and noted restorer Dave Hentschel began the painstaking process of dismantling and cataloging the car in its entirety, and were elated to eventually confirm its provenance and history as the one and only V16 Miller race car.

Luck intervened then in the form of racecar historian Jim Etter, who had discovered what he thought was a Miller V-8 engine but soon realized was one half of the original V16, which had been cut in two to make a Sprint car engine. Etter was astounded to find that not only had almost all the severed components been saved, but a new spare crankshaft and webbings were also there for the taking. Etter bought the whole inventory and resold it to Speedway Motors owner and vintage racing engine collector Bill Smith. Ever the dealmaker, Chuck Davis eventually managed to buy the entire lot from Smith, who was notorious for resisting any and all efforts to part with even the most insignificant items in his vast inventory

The restoration of Harry Miller’s V16 racer was finally underway.

Chuck Davis had discovered that foundry expert George Parker of Monrovia, CA possessed a large group of Miller’s original wood foundry patterns and drawings, including those for the V16’s crank case, cam boxes and covers. Parker loaned the patterns to Davis, who sent them to patternmaker Art Bergstrom of Beecher, IL for reconditioning, after which they were used to pour new castings. The Bridgeview Machine Company performed the finishing work, while Dave Hentschel machined other new parts using the original Miller drawings. The completed components were then sent to Joe Gemsa of El Monte, CA, who assembled them into the brand new Miller V16.

The last hurdle in the engine project was the carburetors, which had long disappeared. Fortune smiled on Davis once again when he located a single example in the possession of the I.M.S. Museum’s Bill Spoerle. Davis had a set of eight reproduced from that single original, enabling the engine to be fired up for the first time in decades; it started and ran almost flawlessly. With Davis’ discovery of a correct transmission and clutch assembly in Jim Brucker’s warehouse in Santa Paula, CA, the car’s driveline was complete.

There was more good news for Davis. When the car was rebodied prior to the 1950 race, the chassis was only slightly modified to narrow it to single-seat form, making it relatively simple to reconfigure to its original layout. New suspension pieces were cast in bronze and machined according to the original plans, and new quarter elliptical springs were fabricated at Hollywood Spring.

The body panels represent yet another serendipitous chapter in the Miller V16 story. They were purchased in the 1950s by Louisville saloon owner Jack Richmond, who planned to use them in building a hot rod. Richmond never realized that particular ambition and the panels remained untouched and intact until the ever-fortunate Davis got word of their existence, tracked them to a Cincinnati collector, bought them and trucked them back to Chicago. All the pieces were there: the radiator shell, hood, cowl former and cowl panel, tail, gas tank, belly pan and rear axle tray. When Dave Hentschel affixed them to the chassis, they proved a perfect fit.

Junior Dreyer massaged the body panels back to proper form, after which Hentschel skillfully reapplied its Silver and Black 1932 livery. Dreyer also made a new gas tank and repaired the oil cooling tubes that also served a cosmetic function as the grill bars, one of the last items checked off, and not a moment too soon: the car’s astonishing journey from revolutionary race car to dismembered, scattered hulk to glorious, historical showpiece was literally completed with no time left on the clock before its reintroduction to the world at the 1993 Monterey Historic Races, where Harry Miller’s cars were honored for the very first time as the event’s annual theme. Since that auspicious occasion, the V16 Miller has attended every Milwaukee club affair, and has appeared at the Goodwood Festival of Speed and the Pebble Beach and Amelia Island Concours d’Elegance. In 1994 it also earned AACA certification in competition vehicle class 24A and First Junior and First Senior awards.

Only Harry Miller’s creativity and vision could have conceived of such a fascinating machine, and only his dedication to excellence could have brought it to such grand fruition. Its resurrection by Chuck Davis, Dave Hentschel and myriad other characters and talents, certainly one of the most highly anticipated offerings in recent memory.