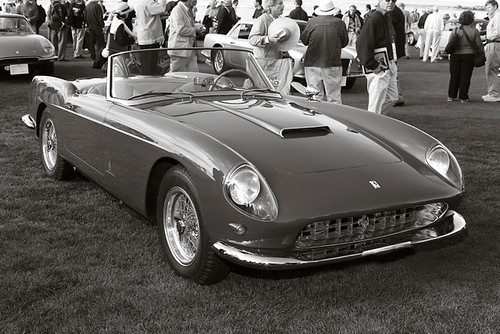 • Ferrari’s first road cars were little more than thinly disguised racing cars, built to custom order for the world’s richest enthusiasts. The cars left the Maranello based factory to be bodied by one of the many Italian coach builders with often very beautiful open and fixed head bodies. While these road going Ferraris were among the finest machines available, for Enzo Ferrari they were little more than a means to finance his racing. The increasing popularity of the production based ‘Gran Turismo’ racing saw Ferrari take a renewed interest in road cars. At the 1956 Geneva Motor Show the first purpose built Ferrari road car was introduced, dubbed the 250 GT and bodied by Pinin Farina. The production cars were built by Mario Boano, who closely followed Pinin Farina’s original design. Around 70 virtually identical examples were produced, making the 250 GT Boano the first Ferrari built in a series.

• Interesting that Boano himself also showed a Ferrari 250 GT based machine on that same 1956 Geneva Motor Show. No doubt inspired by the American designs of the day, Boano had crafted a very extravagant Cabriolet body for the 2600 mm chassis. The most noticeable styling influence from across the Atlantic were the fins that ran along the side of the car. It was also distinct in the prominent use of chrome. It was shown twice more and then sold to an American collector, who owns it to this day. Even though it was the only 250 GT fitted with an open body by Boano, it sparked an interest in a ‘Cabriolet’ production car. Pinin Farina was commissioned with the design and construction of the car. Official known as the ‘Spyder 2-Posti’ the first prototype was ready in time for the 1957 Geneva Motor Show. A further three prototypes were constructed before the design was finalized. This was used for the subsequent 36 ‘250 GT Cabriolets’, although it must be said that no two cars were completely identical.

• In good Ferrari tradition the chassis of the 250 GT production cars was closely related to that of the competition cars. Similar to all of the company’s sports car chassis of the day, it was constructed around two large tubular rails with plenty of cross members for rigidity. Suspension was by double wishbones with coil springs at the front and a live axle with semi-elliptic leaf springs at the back. Like most Italian manufacturers Ferrari continued to use the tried and trusted finned drum brakes long after the British had showed their advantages on road and track. Several of the 250 GT Cabriolets later received disc brakes, including the first prototype, which was sold to factory driver Peter Collins. Retrieved from a Jaguar D-Type the same set was later used by the factory for testing purposes before the Works racing cars finally received discs as standard equipment in 1959. Power was provided by the familiar 3-litre version of the Colombo ‘short-block’ V12. Ferrari claimed it was good for at least 240 bhp.

• The Pinin Farina penned body was built in a separate workshop instead of the coach builders main factory to ensure that each car could receive the customisations as per the customer’s request. Despite the many detail differences there are several design cues that are shared by most of the 36 production cars like the covered headlights, the ‘bumperettes’ on the nose, the bonnet scoop, the ‘kink’ right behind the doors and the small taillights mounted on top of the rear fender. While the latter looked particularly well, they were quite hard to see and were replaced by more regular tail lights on the last car. Another distinguishing feature to be replaced by more conventional equipment on the final cars were the ‘bumperettes’, which really offered very little protection. The interiors were also subject of much customization, so it is not surprising that Sergio Pinin Farina once referred to the 250 GT Cabriolet as a series of one-offs. Unlike the aluminum coupes, the Cabriolets were built from steel for additional rigidity.

• With the design finalized, production commenced halfway through 1957 and first deliveries to the rich and often famous customers were in the fall of that same year. Being very much Ferrari’s and Pinin Farina’s most prominent model, no fewer than ten different examples were shown at as many motor shows in the following years. Production ended in 1959, when 250 GT Cabriolet was replaced with a less extravagantly styled Cabriolet, which was known as the ‘Series II Cabriolet’ and followed the lines of the Pinin Farina penned 250 GT Coupe introduced in 1958. For those not seeking the luxury offered by the 250 GT Cabriolet, Ferrari introduced a second open 250 GT in 1958; the California Spyder. Styled by Pinin Farina, but bodied by Scaglietti this two-seater was much more closely related to the highly successful 250 GT racing cars. In fact several examples were equipped with alloy bodies and raced quite extensively. Among its most important victories was a GT-class win during the 1960 Sebring 12 Hours race.

• Today the exquisite 250 GT Cabriolet is quite often overlooked as the California Spyder with its competition pedigree grabs most of the attention. This is no more apparent when comparing values, which are three to four times higher for the California Spyder. One of the first Ferraris built in any significant number by Pinin Farina, the 250 GT Cabriolet nevertheless remains as one of the most beautiful and superbly detailed Ferraris ever built. It is most fitting that a larger number of the surviving examples are today part of prominent Ferrari collections. No fewer than fifteen examples are shown above including the first of the prototypes and the very last example, which already sported Series 2 styling cues. Many of them were shown at the 2003-2005 Pebble Beach Concours d’Elegance, at 2007 Quail Lodge, Carmel Valley, a Motorsports Gathering where the 50th anniversary of the model was celebrated.